It’s been 6+ months since I was diagnosed with papillary thyroid cancer. You can’t begin to understand the emotions, thoughts, fears, doubt, and struggle that follows a cancer diagnosis until you experience it first-hand. Many of our closest friends don’t know how far into hell and back we came, particularly in the first 6 weeks after the diagnosis.

I was very fortunate to learn about antiangiogenic therapy as a possible form of treatment for my cancer. With the help of medical observation from our doctors, we proceeded to self-medicate according to this treatment method. I say self-medicate because in the US (being the highly litigious society that we are) MD’s expose themselves to a large liability risk if they prescripe or recommend a treatment method that, while effective, has not yet passed the rigors of research required by the standards bodies to pass as a standard treatment option. Our experience has really opened our eyes about this system, its limitations, and its strengths.

I’ve had to learn some hard lessons this last week:

I’m angry. I’ve gone back and forth between being angry at the US, being angry at our health care system, being angry at my old endocrinologist (for other reasons), and being angry about living in a period of time where this angiogenic treatment is still too new. I have to remind myself that things could be worse; I could be living in a time where chemotherapy was the primary method of treatment for this cancer (as my old endocrinologist said repeatedly, “Chemotherapy is worse than death.”) . It still makes me angry that I live in a time before a better treatment method can be validated and now I have to live without a thyroid gland permanently. If you want to know how angry I am about this, feel free to ask me about it. Be prepare for an expletive-filled conversation too, cause I won’t be in the mood to hold back (I’m not intending to be snarky, I’m just warning you where my head’s at right now ;-) ).

Some good things have come from this, regardless of the circumstances (e.g., I’ve gone from weighing 240 pounds at the beginning of 2015 to weighing just barely under 200 pounds now). More than ever before, the changes that I’ve made to my lifestyle will have to remain permanent to avoid exacerbating the effects of my impending hypothyroidism and risking the return of my cancer.

Thanks to everyone for keeping up with all of this. I have the best family and friends around the globe that anyone could ask for. You’ve all been patient with my complaints, my (sometimes) inappropriate use of humor to cope, and my occasional withdrawals and anti-social behavior on the low days (which have been fewer as time has gone by). Thank you for the dinners, watching my son while we go to doctor appointments, and the nights of fun activities meant to distract us from reality. I love and appreciate you all.

I can’t think of a better way to end this post by asking: does anyone know a good endocrinologist in Utah County? I’m in the market for one ;-)

About 8 years ago I was an undergraduate student at Brigham Young University (BYU) in Provo, UT. I was taking the LING 480 course on translation technology and my world was opened to this new realm of technology and an industry that I had really not known to exist before. It was enthralling! At the time, I distinctly remember daydreaming into the distant future, toying with the strange idea that I could one day teach this course. Call it a premonition…

END_OF_DOCUMENT_TOKEN_TO_BE_REPLACED

I love languages. Since I was young and in elementary (primary) school, I’ve been fascinated by them. The first time I realized there were other languages in the world was when I was in my school’s library and the teacher was reading a book about Ireland to us. I learned about Irish Gaelic and immediately began looking for any books I could find there about the language. Sadly, but not unsurprising, there were no dictionaries or other books on learning Irish in my elementary school in Roy, UT, USA or even in my middle and high (secondary) schools Rawlins, WY, USA. I did, however, come to embrace Spanish while in school, as I felt there would certainly be a reason for me to learn the language and I would have many opportunities in the future to use it.

END_OF_DOCUMENT_TOKEN_TO_BE_REPLACED

It’s been almost exactly three months since my post about having thyroid cancer. It’s also been almost exactly four months since receiving my diagnosis. I’ve been happy to update people as they’ve asked me about my status. Since it’s been a while since my first blog post, I figured it was also time for a more public update. Here are some of the common questions I answer when giving an update about my cancer’s status:

END_OF_DOCUMENT_TOKEN_TO_BE_REPLACED

If you’re a fan of the American TV show New Girl, you’ve likely seen the episode titled Normal and been introduced to what looks like the craziest/funnest looking game ever imagined, True American (here’s a clip). I thought that this was some game that they made up specifically for the show. Boy, was I happy to be proven wrong last night when I found the rules to the real True American drinking game! Now, those of you who know me well know that I don’t drink. Being that this is an awesome game, from an awesome show, I imagine that I’m not the only non-drinker who thought this game looked crazy awesome and wanted to play it. I figured I would benefit that segment of humanity by adapting True American for non-drinkers like myself.

So without further ado, here is how to play the non-alcoholic version of True American!

END_OF_DOCUMENT_TOKEN_TO_BE_REPLACED

The subject of this post isn’t a lie. I’ve known for a month now that I have stage 1 papillary thyroid cancer, and I’m ready to live it out in public now. It really feels good to get it out in the open now!

END_OF_DOCUMENT_TOKEN_TO_BE_REPLACED

If you couldn’t already tell from the fact that I’m very white and very blond (hence the name mero güero), my ancestors came from the Nordic countries, primarily Sweden. As I’ve gotten older, I’ve made a sincere effort to learn more about my ancestors who took the long trip from Sweden and immigrated to the US.

My great, great grandfather, Lars Magnus Olson, was born in Arvika, Sweden and raised between Arvika and Kristiansia (Oslo), Norway after he and his siblings were orphaned at a young age. In Kristiansia, Lars met missionaries from the Church of Jesus Christ of Latter-day Saints (Mormon), converted to the Mormon faith, and left his homeland in search of a better life in Zion (Utah). I learned that in making the trek West after reaching the US, the train at the time only ran from the East as far as Laramie, WY. This meant that to reach Salt Lake City, he had to walk the remaining distance. Thanks to Google Maps, this is what that looks like.

END_OF_DOCUMENT_TOKEN_TO_BE_REPLACED

My career is non-traditional. By non-traditional I mean that stating my job title does not give anyone the faintest idea of what I actually do (e.g., you say, “Engineer,” everyone gets it). As you can imagine, this has caused me some problems whenever people ask me what I do for a living. I’ve had to practice many 30-second explanations of what I do. Want some examples? Maybe some of you have heard one or two of these at one point:

END_OF_DOCUMENT_TOKEN_TO_BE_REPLACED

I get asked for this recipe all the time, and have even had to refer to it in local Indian markets from time to time. Here’s the original, with the vegan substitutions. 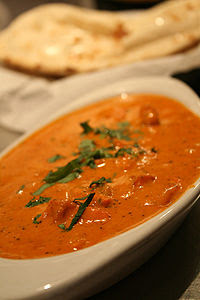